Page 13, Figure 9: Photo was taken near Benoue National Park in northern Cameroon, not in Mauritania as stated in the book.

Page 45, under Flowers header: The first sentence should read "The small flowers (Figure 105) are produced abundantly for about two months during late winter and early spring,... "

Page 65, Figure 44: The flower is 'Yolk Fragrance', purchased in Taiwan and photographed by Mark Dimmitt. Here is a picture of 'Arctic Snow', by David Clulow. 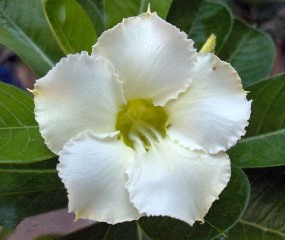 Page 70, Figures 60 and 61: Photos are by David Clulow, not Ashish Hansoti as stated.

Page 96, Origin of 'Singapore': I rediscovered a lost note from Albert Chan and a letter from Frank Horwood dated 1980. Professor Holttum told Horwood that Adenium 'Singapore' was introduced to horticulture in Singapore in 1933, 50 years earlier than I had thought. (Richard Eric Holttum was Director of the Singapore Botanical Garden from 1926 to 1949, and later was on the staff of the Royal Botanical Gardens at Kew.) Chan's and Horwood's letters are archived here.

Page 106, third paragraph: In fact, A. swazicum and A. oleifolium do experience freezing temperatures. Adenium oleifolium remains a short shrub partly because it is periodically frozen to the ground.

Page 134: The Adenium "arabicum" at the bottom of the page is by Godong Ijo Nursery, not David Clulow.

Page 32: As stated, A. "arabicum" does indeed tend to grow short and squat at low, dry elevations and high, cold ones, and is often arborescent in wetter habitats. However, growth form is not only environmentally controlled; there is also a strong genetic influence. In cultivation some seedlings become shrubs with squat caudexes, while others grown in the same conditions become trees with tall, conical trunks.

Page 47: The range of the unnamed Omani Adenium extends into eastern Yemen, near Hvai (Boris Vrskovy pers. comm.). The plants in Figures 108 and 109 are in fact from this location in Yemen, not in Oman as the caption states. The photos are also by Boris.

Hybrid Chapter, page 70: After some discussion with Thai growers, it is apparent that most of their "arabicum" cultivars are in fact not cultivars. That is, their named plants such as 'Golden Crown', 'Petch Ban Na', Ra Chi Nee Pan Dok', etc. will not breed true either from seed or asexual means. This is because the names refer to particular growth forms achieved by careful pruning and training of the plants from a very small size. It is still unclear whether there is a formal nomenclatural term for this kind of plant. But they should not be called cultivars, and their names should not be enclosed in single quotes.

Page 129, Table 2: When considering whether to water an adenium, it is important to know whether the plant is active or dormant. Click here for a gallery illustrating the terms dormant, active, and growing.